We went to Chinatown today on the train from Pasadena while Jeff helped my Aunt Marilyn out with some things.

We went shopping and found some "koala cookies" (they were out of Hello Panda), and some shoes for my sister (she had admired Emma and Bridget's shoes at Easter and said she wished she had some like that, and when Emma saw the bigger ones she said, "Those are like Bridget Emma's shoes! Aunt Megan would like that!" So we bought some for Aunt Megan-- who liked them very much when we gave them to her tonight.)

After a while I realized that none of us had really eaten much, and I was starting to get really hungry and thirsty. We stopped in at what is probably my favorite (and the cleanest-- they always have an "A" health inspection rating in an area where most restaurants get "B"s on a regular basis) Vietnamese noodle shop in Chinatown, Pho 97. 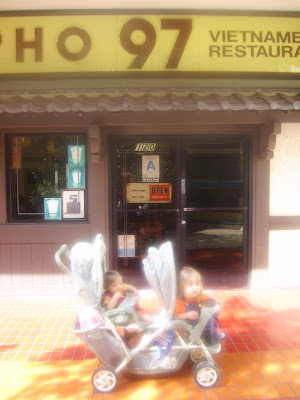 Emma has been using chopsticks on her own for quite a while now-- about a year, I think, maybe a little more-- and she's getting much better at it. 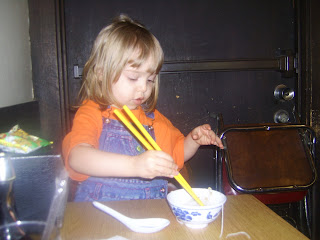 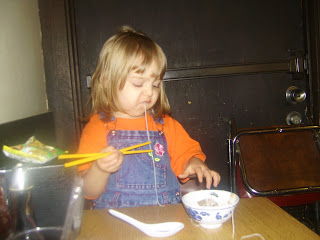 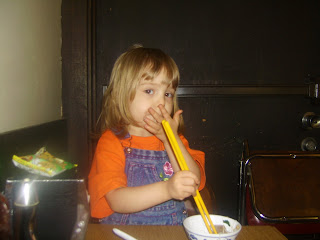 We got a big bowl of noodles, well-done beef, and broth, with yummy things on the side to mix in (a huge bowl for $5!), and I got a soda, too. Emma shared with me, and Bridget got jealous, despite having some baby food. So she got some beef, too. She liked it. 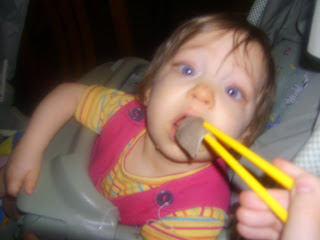 Then Emma fed Bridget a few noodles and some more beef. 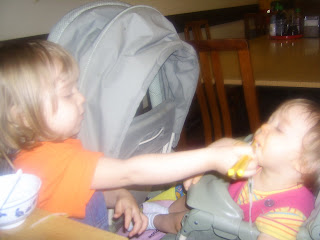 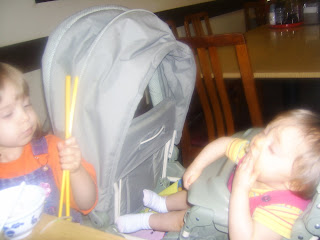 And of course, then Bridget wanted to try them. She had fun holding them and looking at them and tapping them, even if she can't do anything else with them yet. 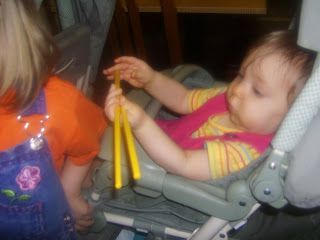 Emma had so much fun with the chopsticks, she really loves them! (I did too at that age. In fact, I still do. And they're good for hand-eye coordination and fine motor skills.) So we picked some up, pretty ones with pretty covers, and some kid-sized ones too (I tried to get her to choose the pretty ones that went better with ours, but she wanted the bright green and blue ones with some funky cartoon character on them.) She's thrilled with them. :)

And to end the day, before we got back on the train, I let Emma play on the kiddie ride-ons (she doesn't like them to be on, just to climb on them when they're off.) 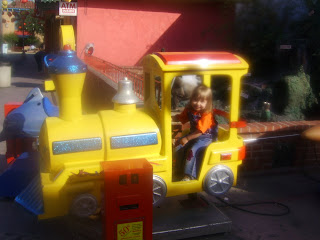 My aunt got us sandwiches, which is what we had for dinner. All in all, a fun day-- and I only spent about $28, including train fare and a shopping trip. I love Chinatown. :D
Posted by Anne/kq at 11:59 PM

that sounds like a really fun day. CHopsticks at 3! wow:)