The Safety 1st Complete Air Convertible Review (or, how I got 3 rear-facing car seats in our Corolla)

Most of you reading this probably know that I'm a CPST. Most of you have probably also heard that rear-facing is the safest way to ride. If you haven't, check out this video:

While EVERYONE is safer rear-facing, evidence (real life statistics as well as crash tests) shows a significant decrease in injuries and deaths when children under the age of 4 are properly secured rear-facing rather than forward-facing. Nor is 4 the limit; the benefit just becomes less and less significant after that-- but it's still there, and still the safest way to ride as long as the child is within the limits of the seat (in the US that means has one inch of shell above the head in most seats, though in some it's even with the shell, and is under the rear-facing weight limit.) The American Academy of Pediatricians has recommended since 2002 that all children should ride rear-facing to the limits of the convertible seat, and also recommended that manufacturers make seats large enough to accomodate the average 4 year old (40-45 lbs.) Seats are just starting to be released that can actually do this in the U.S. (If friends in Europe are reading this, in Sweden seats are available that rear-face even longer by weight, though about the same length of time by height-- since Swedish seats can typically be used rear-facing until the ears are even with the top of the shell. These seats are approved for use anywhere in the EU. If you'd like more information on them, please check out this site: carseat.se.)

Bridget is under 4, so there is a clear benefit to her rear-facing. While the benefit is not as clear for Emma, she really really really wanted to. And it is safer, though not as measurably so (part of that is that we don't have much data on rear-facing past the age of 4, as it's an age when even Swedish seats are often outgrown.) When one of my Radians' rear-facing limits was retroactively raised to 40 lbs. (applies to all Radians manufactured 9/08 or later) I turned Bridget back rear-facing. Emma got very jealous. She said it was "so comfy" (I let her ride in it one day) and "so safe" and she cried every time she had to get in forward facing.

Now, I'm not advocating giving in to a child's tears ( ;) ) but it's safer; we had the means to get a Complete Air (used the 20% trade in deal at Babies R Us to recycle a near-expired, unknown history seat we had been given and Jeff had a big check) and, well, it made my life easier... Emma loves being rear-facing, is "comfy", takes naps in the car again (which she had quit when forward-facing, for the most part), and loves the expanded view she has out the rear as well as the side windows.

The Complete Air is currently a Babies R Us exclusive (though also available at some Toys R Us stores that have a Babies R Us section.) We got the "Harvest" cover, which is an awesome orange and brown (the other cover currently available is a rather meh grey.)

I put the Complete Air behind the driver's seat in our Corolla. It was not very easy to get all three in and independently tight, and they have a slight tilt from the retractor I used to lock the belts (but not enough that it bothers my kids or that I worry about it.) The Complete Air needed a chunk of pool noodle under it in order to get even the maximum upright allowed angle of 30 degrees from vertical. (I didn't mind, I keep pool noodle chunks with me... And I rather expect that of most seats in our Corolla-- an '03, by the way. Be aware that newer models have prohibitions on car seats, or anything else, touching the back of the front seat.) I had to pull the cover up to access the belt path in order to tighten adequately, and it was difficult to get it back down. I scraped my knuckles a bit too (not uncommon with Dorel seats, unfortunately.) But the end result was that it was in, and all seats were independently tight (less than one inch of movement at the belt path if you remove the seats next to them and tug where the belt goes through.)

Emma, at 5 1/2 years old, has tons of room to grow by height (the Complete Air allows use until the head reaches the top of the headwings-- which go two inches higher than the shell!) She is on the third of five sets of harness slots rear-facing (straps come from at or below the shoulders rear-facing, at or above forward-facing.) She is above the stated height "maximum" of 40 inches. However, manufacturers put a height maximum on because they have to, not because there really is one. Every child will fit a seat differently at the same standing height. That is why these "maximums" are really more guidelines than set in stone-- and while the company will, for liability reasons, stand behind them, well, they're not really important, safety-wise. (Weight limits, on the other hand, should be followed exactly.) Where the head and shoulders hit is the important thing, and by those guidelines, she has a ton of room to grow. (Dorel is ALSO well-known for their idiotic height maximums which really have nothing to do with reality of how a child will fit the seat.) As a technician and as a mother, I am very comfortable using her in this seat to the maximum weight limit despite her being over the "maximum" height guideline. She currently has about 2 lbs. to gain before she will outgrow it by weight (well before height.) This is an excellent choice of seat for tall and skinny kids! 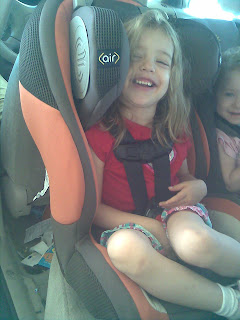 Emma loves the colors of the cover. I like that the seat is easy to wipe clean, though the quality could be better (especially for the price tag!) I prefer a seat that allows rear-facing tethering or has an anti-rebound bar-- this one does not. However I would choose it again anyway, because right now it is our only practical available seat to rear-face behind the driver's seat (the Radian installs too reclined to allow the seat back as far as my husband needs it in our car.) The headwings move with the harness, and are easy to adjust when installed. I have not had problems reaching the tightening mechanism. The tightening mechanism is also very smooth (though I don't have to use it much because of the continual loop routing of the harness strap.)

There are a few drawbacks. The straps tend to twist and need to be untangled every time. The crotch buckle falls under Emma's bottom and has to be fished out. There are no strap covers-- not a problem for her but might be for less narrow kids (if so, you can cut the toes off of baby socks and put them on the harness for neck protection and comfort.) Most significantly, it is not the easiest seat to install, and the bottom harness slots are amazingly high. It shouldn't have been too much trouble to put one more, lower set in. As it is I fear we will see many babies in this seat who have just outgrown a 22 lb. infant seat with a shorter shell, and do not yet fit it by height, especially if installed less reclined (as mine is.) That is something I hope to see remedied in future redesigns (as well as a reconsideration of the idiotic 40 inch height "limit" for rear-facing.) Also, the forward-facing harness weight is only 50 lbs.; while this should be more than adequate if Emma still needs harnessing once outgrowing it rear-facing by weight, a heavier child might reach that weight much earlier. It has tall enough top slots that I would love to see a 60 or 65 lb. weight limit on it.

Overall, though, I'm pleased with the seat, would recommend it, and would buy it again.

Here is our three across. 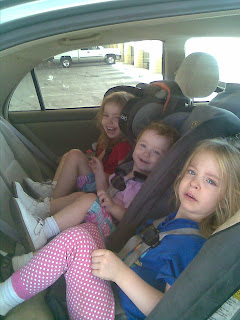 Our long term (okay, in the next few weeks) plan is to get a new Radian XTSL seat, which will rear-face to 45 lbs., and have that over where Bridget's current seat is (and move hers to the middle for Maggie.) The way Bridey and Emma gain weight, I'm thinking that Emma should be able to rear-face at least until 6-- at which point, provided she demonstrates that she can sit properly, I will be comfortable boostering her (if she wants to use a booster, and as I said if she is behaviorally ready. I'm thinking the Britax Parkway Slide Guard...) For now, we are quite happy with this setup, and the safety and comfort it affords our children.
Posted by Anne/kq at 2:19 AM 12 comments: