Things that irritate me when I'm pregnant (a vent)

1. The cat keeps pooping in the corner of the bathroom instead of the litter box. It is bad enough when it is in the litter box but without any absorption whatsoever it STINKS. I am super smell sensitive when pregnant, moreso even than usual, and that's just not nice.

2. The kids keep changing clothes just for the heck of it. I am so tired I'm not even keeping up with NORMAL amounts of laundry, much less that generated by 3 girls changing clothes 4 times a day.

3. It's awful hard to make dinner when you have severe food aversions all over the place.

4. It is SO HARD to get health coverage for the pregnancy. Especially when you didn't have a period and you don't therefore have an easy-to-calculate due date. They REQUIRE a due date to get coverage. If we don't figure something out I'm just gonna have to make up a "last period" date based on how far along I think I am. I don't like having to do stuff like that.

5. I hate that my migraines get worse when I'm pregnant. Isn't it bad enough being pregnant, without adding migraines into the mix? When not pregnant I get maybe 2-4 a year. When pregnant, I get at least 2 a month. Often more. Gah.

7. People who assume I want a boy. (I actually want a girl. Jeff wants a boy. Of course we'll be happy either way.) We were not "trying for that boy." We were trying for a BABY. So shut up. Along the same lines, "So if it's a girl, are you done, or are you going to KEEP trying for a boy?"

8. People who ask if I'm going to have my tubes tied after this. (This hasn't happened yet. Just wait until I get big and have 3 little kids out with me. It will. It happened last time, and that was only my third! I do get a kick out of asking those rude people if they've heard of the Duggars, though... They usually go into shock and I walk away laughing.)

9. People who find out what I have an aversion to, and keep talking about it on purpose. It's really not funny to make me puke. It hurts.

It's a darned good thing that I get a baby at the end of this. That's what makes it worth it. But in the mean time some things really suck.
Posted by Anne/kq at 12:16 PM 1 comment:

Labels: frustration, It's all me, pregnancy stuff

So, um, need to make a small correction...

In my birthday post I mentioned that I wasn't pregnant yet. Well, on the morning of the 22nd I took a pregnancy test for kicks and giggles and because I'd been throwing up a bit, tired, cranky, forgetful.

This was the result: 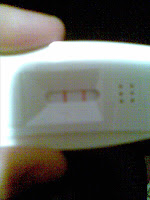 So, um, yeah. It was positive as soon as the pee crossed the test window (and it said "read at 3 minutes!")

I think I'm not too far along, but I haven't really got a clue, since I wasn't keeping track of ovulation, and I'm so irregular in my cycles (my last actual period was in November. The one before that in May of last year.) So I'll have to have that dated when I make it in to the doctor's. But I'm guessing late Jan. to early Feb.-ish would be right, possibly? We'll see. :)

Labels: answer to prayer, happiness, It's all me, milestones, Pictures, pregnancy stuff

Tomorrow is my 27th birthday. It's been a good year in many ways. Since last year, I've done a lot of volunteering as a CPST (I was barely certified my last birthday), Emma has gotten much better (we were still worried about her health this time last year), we've moved to a big house with a back yard and a washer/dryer, Maggie has grown into a little talkative PERSON instead of a baby, I've pretty much recovered (mostly) from the PTSD or whatever I had after having her (at least it seems so, I hope so), we've figured out how to eat almost anything we want to soy-free, which makes her much healthier, I've made some new friends, Jeff has gotten a new job at which he is very happy, I got released from the calling I hated and got a new one, Emma learned to ride in a booster and to read, my uncle's book was published which is very awesome for him, and we've been able to do many other fun things.

There have been a few disappointments. I'm still not pregnant (at least as of last time I tested, last month); I was hoping to have had another baby by now, this time last year. In a way that's been a good thing too. We STILL don't have a bigger car, and much as the kids are content most of the time, sometimes when they're fighting it sure would be nice. ;) And we're not unpacked yet, and of course the house is always a constant struggle between clean and messy. That never ends, I don't think! Maggie isn't quite weaned which is a good thing in many ways, but also means I can't sneak the odd soy-containing treat here or there when I want to without sickening her. And there always seem to be small disappointments and setbacks to go with the joys and triumphs, of course.

But overall, a good year. And what's the point if we don't have things to work toward and look forward to, anyway?

I remember as a little kid being amazed that you could be a WHOLE YEAR older and not feel any older at all. Now as a "grown up" I realize that getting older, growing up, takes place so slowly we don't even notice it. It happens through the day to day, the making choices, the things you learn and do. And darned if one day you don't realize you've matured in a way you never thought you would-- and yet at heart you're still the same person you were when you were a kid. Amazing. And kind of cool. But it almost seems like it does when you see kids you don't see every month after a few months and they've grown two inches, while you hardly notice your own getting taller at all-- maybe someone from the outside notices growth more than you do yourself. To God we must all be like little kids that he watches growing slowly, rejoices in our small milestones and big ones, but I wonder is there someone with Him that points out to Him how much we've grown because they don't see us as often? Maybe. Maybe not. In any case, the growth does happen, whether we notice or not. I'm glad I've been given another year here to learn, and grow, and enjoy my kids doing the same. I hope I can do even better in the year to come. I hope we all can. :)
Posted by Anne/kq at 6:22 PM No comments:

Labels: Deep thoughts, happiness, It's all me, milestones

Hope everyone is enjoying theirs.

I woke up with a killer sore back, and missed church. But other than that it's been a good day (especially since pain relief from the Advil and heating pad finally kicked in.)

The kids made me cards. All hand-drawn. I especially love one Emma made me (I love them all but the message in this one, written all by herself, is what is so special.) It says, "Thank you for being a good mom. Luv, Emma"

I'm saving that one for ten years from now, when she tells me that I've always been a horrible mother. I'll have proof. ;)
Posted by Anne/kq at 2:15 PM No comments: