It's been a while hasn't it? I didn't realize how long it's been since I blogged...

I've been busy. Busy, busy, busy, seems like we've been DOING for two months straight. April is always super-busy for us and with Bridey's broken leg was more so this year. We spent several weeks at my mom's house, then came home just in time to get ready for Easter and birthdays and... Yeah. While at my mom's house we had lots of help, which is good as for 2 weeks I could not lift and Bridey could not bear weight. The Relief Society stepped up and I also had help from family, friends, and even my family's friends-- my sisters' friend's mom came and helped us several days (and gained the girls' undying love by making cupcakes with them and making them princess outfits out of tissue paper and ribbon and tape...)

Right before the end of tax season (which was 3 days late this year) I worked a check at the Petersen Auto Museum with SafetyBeltSafe, and we got a "Safety Belt Saved" award. The coolest part of this for me was my button. I keep it on my purse. It's teh awesome.

Here is a picture of the girls in their Easter dresses, as is tradition all matchy and adorable: 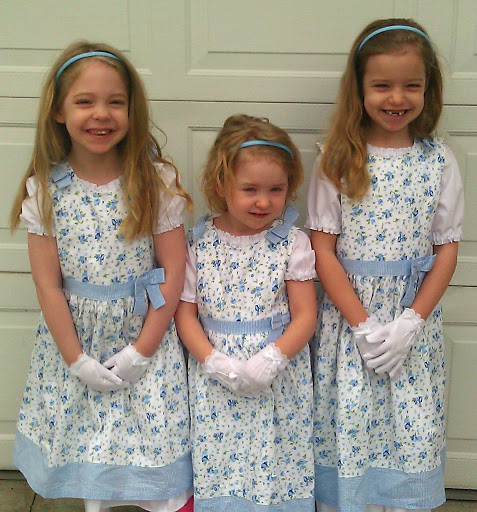 And wearing their hats, yes, hats are also tradition, bonnets until 2 or 3 and then hats thereafter: 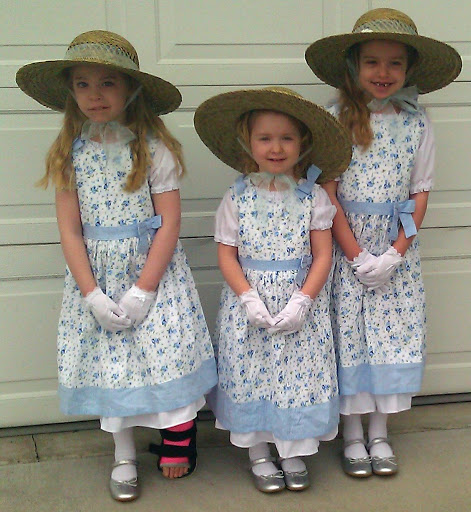 Then there was May. My brother was confirmed a member of the Catholic church (he converted) and had his First Communion; we attended to support him in his desire to renounce evil and turn to God. We had a family birthday party for me and the girls the same day.

Bridey got her cast off, and after a slight snafu (we realized the next week or so that she still seemed to have a stitch in; we had my dad remove what turned out to be TWO, and thereafter her limping and complaining of pain stopped) she's doing great.

We got a new van! It's a 2005 Odyssey-- after we were protected so well by our 2002, buying anything else was kinda out of the question for us. We love it. We went out to Corona and found out that it will be a cinch for us to get swivel screens added in the back rows so rear-facers can watch the DVD player! That will be kinda super-cool as the older two tell me they want to rear-face again to feel safe, and we're going to oblige them with Swedish seats...

I had a few private seat checks in there too-- including one for a friend whom I think I know now better than I did when we were in high school, but either way, I'm glad to know her. And so glad she cares to keep her sweet kids as safe as possible. :)

My uncle who has ALS has been in the hospital; we downloaded Audacity and recorded a CD for him. It has some hymns from me, a song with all of us singing, Emma reading a story, us telling jokes, Ems and Mags singing songs with me (Bridget was not in the mood, lol, typical), and I hear it was a hit. The kids and Jeff learned a new song for it-- the "Alleluia/Praise Ye the Lord" caller/response song-- and it was very amusing to me that Jeff couldn't remember his part on his own. So after Emma learning the whole "Alleluia" tune with me, she had to switch to his side to lead him in "Praise Ye the Lord" because he couldn't remember the notes without a strong singer leading him! LOL! Note to self, if we ever sing a group thing as a family, put Emma with Jeff...

I had a birthday. It was kind of a hard day, being 5 months anniversary of Becky's birthday. I crashed a bit hard the day after. The day of though, my aunt watched the girls and we went to a movie. Then we had dinner with my dad. The day before we had dinner with my friends Melina and Leslie and their mom Celia at their house (I also consider Celia my friend, actually.) We have known each other since Meli and I were in Brownies together... We go way back. They're pretty much family at this point. Isn't it great how your family can grow to include people who you love even if they weren't born into your family? I have a lot of friends like that. Some I've met online, some IRL, but all are now family. Love that.

Anyway, in between ALL that business-- we've been sick over. and over. and over. Ick. It seems like when we're not busy, I'm sick, and when I'm not busy or sick, I have a hard grief day. I'd say I'm ready for a break but, um... I don't know that there's one in the foreseeable future coming up... I'm looking forward to stuff like flying to Ohio to help with a friend's son's birthday party, getting together with local-ish online friends, a trip to Reno, etc. But still.

That's ok. I'd rather be busy doing good things, making happy memories for my kids, and helping and supporting others. I mean, that's life, you know? Even with some grief and illness mixed in-- it's good. And I'm glad I get to experience it.
Posted by Anne/kq at 10:59 PM 1 comment: