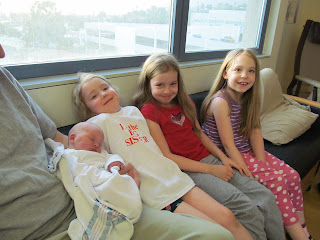 Congratulations! She is beautiful! I am so glad that she is healthy and happy!

Congratulations! Man, I was sweating it out with those nurses as I read this account! You keep 'em on their toes! So glad you were in such capable hands. Your doctor sounds like a dream. Heal quickly! And enjoy that bundle of love.

Oh Anne. I just totally lost it. When I got to the part where she was screaming, I turned into a big puddle of extatically happy hormonal mushy mess. I'm so happy for you, Jeff and your girls. So many precious happy times ahead for you.

I am in TEARS here. A happy note for the number 21. I bawled when I read about Emma. Such a sweet sweet soul. So innocent and loving. All your girls are but I tell you that little Emma is a gift.
Oh Katie Sue is so here to stay. Her older sisters made sure of that. I have been praying and I will continue to.
Anne, she is beautiful. What a blessing. My heart is in my throat and I ache for you but I smile knowing that she is here. For keeps. She is all yours.
God is Good. Thank you Lord

Had me tearing up Anne!!! I'm so glad she's here and alive and well. I'm sorry you didn't get the birth you wanted, but I'm glad that everything was done perfectly so that she DID get her safely!
She's beautiful hun!!!
Congratulations again!

Oh, Anne, what a miracle! I am so thankful for your beautiful, healthy Katie Sue!

Oh Anne, I've never cried this hard in my life over a birth story.